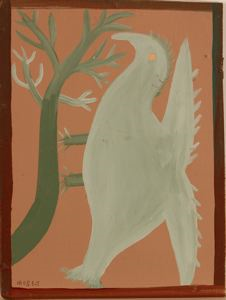 
Tolliver used exclusively cast-off materials for almost everything he painted, particularly early in his production. As he became well-known in Montgomery, and eventually in collecting circles for self-taught artists, he began to take commissions to paint specific subjects and objects such as chests of drawers or other furnishings. He repeated subjects consistently over time, however, including birds in trees, which were popular with his clients. Those same clients were often the source of many of the cast-off supplies that he utilized in his artâthe boards and paints were brought to him for "recyling" and he frequently compensated the donors with art.

Keywords Click a term to view the records with the same keyword
Bird
Portfolio List Click a portfolio name to view all the objects in that portfolio
This object is a member of the following portfolios:

Your current search criteria is: Keyword is "B" and [Object]Object Type is "Painting" and [Object]Display Artist is "Mose Tolliver".