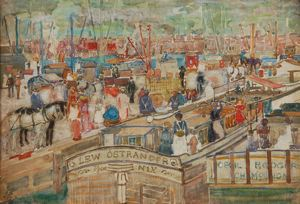 
This watercolor, prominently featuring two barges, represents an atypical subject in Prendergastâs oeuvre. He could have painted the work in New York or Boston, since his watercolor activity centered in these two cities between 1900 and 1905.

The port depicted in the compositionâs upper band is a bustling commercial environment, filled with longshoremen, dray horses and carts, and booms for loading and unloading cargo. However, the two barges, Lew Ostrander, Phoenix and Cecil Rodgers, Champlaign, are transporting not commodities, but people, most notably the women and children that stroll or sit on deck. The quay forms a dramatic diagonal from the lower left to the upper right, implying recession in the otherwise flat pictorial space. Compositions such as this oneâa geometric arrangement of flat patterned forms in bands across the surfaceâdemonstrate Prendergastâs appreciation of contemporary innovations in French Modernism.

Keywords Click a term to view the records with the same keyword
Figure Groups
Horses
Harbor
Shipping
Wagon
Laborers
Dock
Barge
Portfolio List Click a portfolio name to view all the objects in that portfolio
This object is a member of the following portfolios:

Your current search criteria is: Keyword is "B" and [Object]Object Type is "Painting" and [Object]Display Artist is "Maurice Brazil Prendergast".