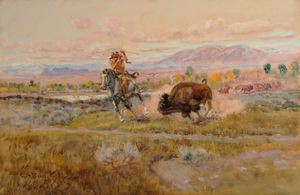 
"Fighting Meat" is compositionally similar to an 1894 oil painting by Russell, "Buffalo Hunting" (Amon Carter Museum, Fort Worth); both works show a single Indian brave preparing to bring down his quarry with a bow and arrow. In the museumâs watercolor, the artist focused on the violent nature of the hunt, capturing the death throes of the already wounded animal and the intensity of the Indian charging on horseback. The bright, clear coloration is most typical of the watercolors Russell painted late in his career.

American Paintings from the Montgomery Museum of Fine Arts, cat. no. 43, p. 118.

Keywords Click a term to view the records with the same keyword
Animals
Figure
Male
Horses
Mountains
Hunting
Bow
Colorful Sky
Fighting
Desert
Plains
Portfolio List Click a portfolio name to view all the objects in that portfolio
This object is a member of the following portfolios:

Your current search criteria is: Keyword is "B" and [Object]Object Type is "Painting" and [Object]Display Artist is "Charles Marion Russell".