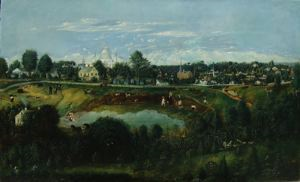 
Unlike many topographical paintings that focus solely on the built environment of a community, this work prominently portrays the inhabitants of Montgomery and their activities in the late nineteenth century. In the center are vignettes of daily goings-on designed to educate the viewer about the diverse elements of what was still an almost frontier-type settlement. A variety of figures illustrate the cross section of occupations, races, and economic classes found in Montgomery. Based upon buildings recognizable in the work, it is estimated that the painting dates from the decade between 1870 and 1880. Although the areas south and east of Montgomery and the Alabama River are today an integral part of the city, at the time the population was centered on the riverfront and Commerce Street, extending up to Court Square. Transportation allowed for the further growth of the city. The work offers a study in contrasts. On the right are mule and horse drawn vehicles; a wagon holds a load of cotton and the carriage appears to be part of a funeral procession en route to a small cemetery on the right edge of the painting. Almost obscured by a row of trees is a railroad train that emits a cloud of bluish-gray steam across the middle of the painting. The coming of the rail system to central Alabama in 1851 was a watershed event in the expansion of the population and economic base.

Keywords Click a term to view the records with the same keyword
Animals
Landscapes
Figure Groups
Cattle
Horses
Buildings
Church
Hat
Flag
Portfolio List Click a portfolio name to view all the objects in that portfolio
This object is a member of the following portfolios:

Your current search criteria is: Keyword is "B" and [Object]Object Type is "Painting" and [Object]Display Artist is "Anonymous Artist, American".