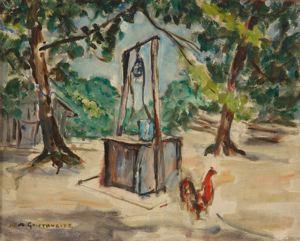 
It is unclear when Anne Goldthwaite painted "Well with Red Rooster," but it is a subject she might have seen almost anywhere in central Alabama in the early part of the twentieth century. Chickens were an important commodity for food and eggs, and working-class and farm families alike throughout the South often left them to roam free in yards. Goldthwaiteâs eclectic Alabama subject matter ranges from scenes of Montgomery streets, with automobiles and mule carts depicted side by side, to figure studies and portraits of family members and acquaintances. As a daughter of the South, she had a unique affinity for the environment and its people.

Keywords Click a term to view the records with the same keyword
Farm Buildings
Tree
Chicken
Water Well
Summer
Portfolio List Click a portfolio name to view all the objects in that portfolio
This object is a member of the following portfolios:

Your current search criteria is: Keyword is "B" and [Object]Object Type is "Painting" and [Object]Display Artist is "Anne Goldthwaite".