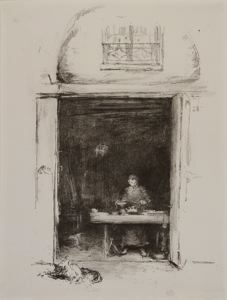 
London printers Thomas Way and his son Thomas R. Way worked closely with Whistler throughout his engagement with transfer lithography, a delicate process in which the artist created a drawing on paper that was then transferred to the surface of a lithographic stone for printing. This working arrangement allowed Whistler the freedom to approach his lithographs as simple sketches while leaving the time-consuming and labor-intensive transfer and printing processes to the Ways. After Whistler published thirty sets of six lithographs in 1887, he began to concentrate on one print at a time. Many of these images were printed in small editions, if at all, and were rarely exhibited. In August of 1894, Whistler sent the Ways a first sketch on transfer paper for "The Forge, Passage du Dragon" (Chicago, 102), illustrating a site in Paris. That paperâs fragility proved problematic for transfer, so Whistler made a second image of the subject about two weeks later. "The Smith, Passage du Dragon," was drawn on transfer paper mounted on a stronger backing paper but that was also problematic for the Ways. Because of his close working relationship with his printers, Whistler authorized them to rework the stone themselves, but impressions from this first state remained extremely faint. Sometime in 1895, Whistler reworked the stone significantly, extending the composition and darkening the lines that reinforced the shadows he had originally drawn. Although the earlier lithographs resemble simple chalk drawings, his later work with the stump, a specialized stylus for working lithograph stones, produced stronger imagery. The MMFA impression is from the second state of the print reworked by Whistler himself.

Keywords Click a term to view the records with the same keyword
Animals
Figure
Male
Bench
Doorway
Portfolio List Click a portfolio name to view all the objects in that portfolio
This object is a member of the following portfolios:

Your current search criteria is: Keyword is "B" and [Object]Display Artist is "James Abbott McNeill Whistler".