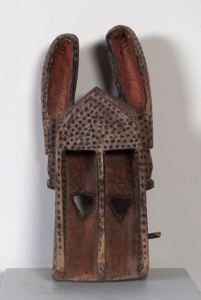 
Among the Dogon, the Awa society conducts public rituals to insure the orderly passage of the dead into the supernatural realm. Many masked Awa members parade in spectacles on the public square, especially when celebrating the end of mourning for one or more recent deaths.
Masked characters dance to demonstrate the ideals associated with young menâstamina, agility, strength, action, speed, and skill. As the spirits of the dead are drawn to watch, they can be appropriately escorted to the spirit world, where they can be productive and where they can be called on again to assist the living.

Keywords Click a term to view the records with the same keyword
Animals
Rabbit
Portfolio List Click a portfolio name to view all the objects in that portfolio
This object is a member of the following portfolios:

Your current search criteria is: Keyword is "B" and [Object]Display Artist is "Dogon Peoples".