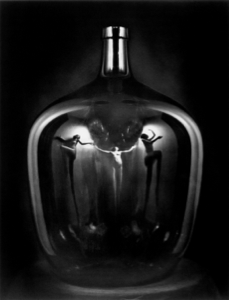 
Elixir (Solange Karsh, 1900â1961) Solange Gautier met Karsh when they both worked with Ottawaâs Little Theatre in 1932. She introduced him to theatre lighting, became his secretary in 1936, and married him in 1939. Solange was Yousufâs muse, model, assistant, and confidante until her death from cancer in 1961. Karsh called her âmy teacher, my expression, my conscience.â In the 1930s Karsh photographed Solange often, capturing the dancerâs graceful exuberance indoors and out, in formal and informal settings. She posed for several nude photos that the fledgling artist submitted to competitive exhibitions, but Karsh never showed her face in those photos.

Keywords Click a term to view the records with the same keyword
Nude Female
Bottle
Portfolio List Click a portfolio name to view all the objects in that portfolio
This object is a member of the following portfolios:

Your current search criteria is: Object is "Elixir (Solange Karsh)".