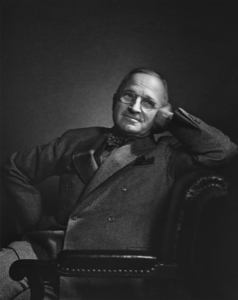 
Harry S. Truman (1884â1972) In 1944 President Roosevelt unexpectedly chose the Missouri senator as his running mate. Roosevelt died four months after inauguration, thrusting Truman onto the world stage. In the almost eight years of his presidency, Truman moved from crisis to crisis with courage and vision. Historians rank him highly for the wisdom of his major decisions. In Faces of Destiny (1946), Karsh noted âa certain frank skepticism about him that seemed to make him a perfect representative of the state whose people take nothing for granted and have to be shown.â

Keywords Click a term to view the records with the same keyword
Portraits
Political
Male
Eye Glasses
United States Government
Portfolio List Click a portfolio name to view all the objects in that portfolio
This object is a member of the following portfolios:

Your current search criteria is: Object is "Harry S. Truman".