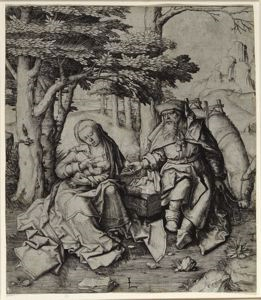 
Lucas van Leydenâs engraving "Rest on the Flight into Egypt" depicts a charming domestic moment from the biblical New Testament events described in Matthew 2:13-23, in which the Holy Family flee the threat posed by the Roman client King, Herod the Great. The motif of Mary suckling the Christ Child was a standard devotional image during the early 16th century and was often included in depictions of this New Testament narrative. Albrecht DÃ¼rerâs engraving "Virgin and Child on a Grassy Bench" of c.1503 may be considered a direct model for the Madonna. Lucasâ portrayal of Joseph is unusual because he is more often pictured standing and picking fruit as opposed to sitting and handing fruit directly to his young wife. This choice of Lucasâ aligns with the early 16th century trend to update old images by giving Joseph more prominence, presumably in response to the growing popularity of the Cult of Saint Joseph, especially the emphasis on him as the childâs "nutritoris domini," or provider. The work includes a number of typological and iconographic references both to Old Testament events, as well as Roman Catholic dogma typical in the depiction of Christian subjects at that time. The Virgin suckling the Christ Child is seen as her providing sustance to the Child, just as the body and blood of Christ would eventually provide sustenance to all mankind through the sacrament of the Holy Eucharist. As a parallel, Joseph offers the Virgin sustenance in the form of a pear, which in Christian iconography was associated with the love of Christ for mankind. The pear was likewise a typological equivilant to the Old Testament apple, which was the source of the downfall of man, just as the Christ Child respresents mankind's salvation. Lucas also cleverly includes powerful symbolic imagery within the trees of the foreground. The pair of trees sheltering the Holy Familyâone verdant, one barrenârepresent to the viewer the Tree of Life growing in the Garden of Eden but also the cross upon which the Christ Child will eventually hang to atone for the sins of mankind.

Keywords Click a term to view the records with the same keyword
Figure Groups
New Testament
Rock
Mother
Child
Forest
Donkey
Jesus
Mary, Mother of Jesus
Joseph, Father of Jesus
Tree
Infant
Portfolio List Click a portfolio name to view all the objects in that portfolio
This object is a member of the following portfolios:

Your current search criteria is: Object is "Rest on the Flight into Egypt".