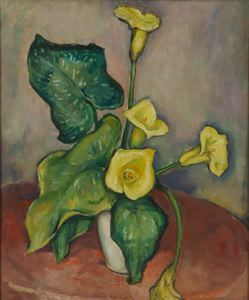 
Goldthwaite established her critical reputation in the New York art world with her Southern subjects, painted when she returned to Alabama during the summers. However, she possessed the versatility to master many subjects, and she adapted her style somewhat to suit their individual characteristics. For example, her portraits are executed with rather more precision than her genre scenes or landscapes, most likely in deference to her sittersâ desire for an exact likeness. Her extant paintings make it clear that she approached many subjectsâsuch as nude studies and still lifeâsimply for her own edification or enjoyment. "Yellow Calla Lilies" exemplifies the simple compositions Goldthwaite favored, with an emphasis on the shapes of the flowers and leaves silhouetted against a loosely brushed background.

Your current search criteria is: Object is "Yellow Calla Lilies".