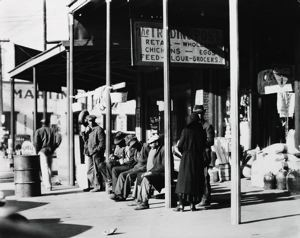 
"Sidewalk Scene, Selma, Alabama," December 1935, dates from Evansâ first year in the South and is part of a series of photos taken in Selma during December 1935 and January 1936. Most of the work in the series focuses on architecture, this being one of the few images showing a gathering of people. Selma, located in West Alabama, was a once thriving agricultural community on the banks of the Alabama River founded on the production of cotton in the nineteenth century. Like many rural areas in the Deep South, it was profoundly affected by the decline of cotton as a cash crop, and the hardships of the Great Depression. The stark contrasts of light and shadow in Evans' photograph accentuated the rudimentary nature of the commercial architecture that characterized small Southern towns' main streets, and the "feed and seed" stores that provided basic necessities for people as well as livestock.

Keywords Click a term to view the records with the same keyword
Figure Groups
Hat
Commercial/Shops
Commercial Advertising Sign
Portfolio List Click a portfolio name to view all the objects in that portfolio
This object is a member of the following portfolios: