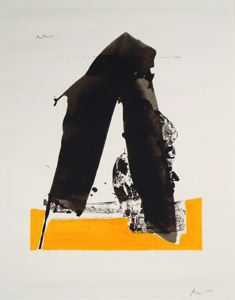 
Moving effortlessly between painting, collage, printmaking, and artist's books, Motherwell allowed each process to influence the others. For example, his satisfaction in the physical activity of drawing and painting and the pushing, dragging, and flinging of pigment coalesce in this silkscreen.

Untitled, 1970â1971, is one of ten works that make up "The Basque Suite"âa tribute to the landscape and people of Spain's Basque region. It and many of the other works in the Suite incorporate earthy colors that endow the elegant contrast of black and white with a mundane reality.

Your current search criteria is: Portfolio is "Classification: Print" and [Object]Display Artist is "Robert Motherwell".