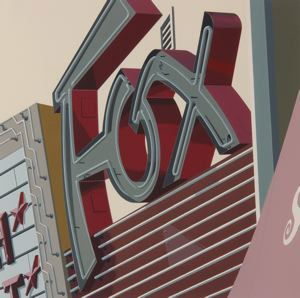 
Robert Cottingham has been labeled both a New Realist and a Photorealist painter. In opposition to Conceptual art, wherein the ideas or concepts took priority over the visual aspects in a work of art, Photorealism emerged as a distinctive art movement in the late 1960s. Coming to prominence in the 1970s, the same period in which Cottingham was beginning his career, Photorealism uses the photograph as the basis for works of art. However, most Photorealist artists expand upon on their photographs of the American landscape by providing details in their imagery in a range of focus that few cameras can capture.

Cottingham's image of the marquee and facade of the Fox movie palace is a close-focused detail of neon tubes and elaborate design. Like a photographer, Cottingham composed and cropped his image in order to isolate certain elements. His work is reminiscent of the work of his fellow Photorealists, but he himself has protested that photographic reproduction of his subjects is not his aim. Instead, his style has proven to be selective in its depiction of reality and his imagery glosses over the physical reality of aging materials exposed to the elements, leaving them pristine and free from any defect.

Keywords Click a term to view the records with the same keyword
Theatre
Signs
Movie Theatre
Portfolio List Click a portfolio name to view all the objects in that portfolio
This object is a member of the following portfolios:

Your current search criteria is: Portfolio is "Classification: Print" and [Object]Display Artist is "Robert Cottingham".