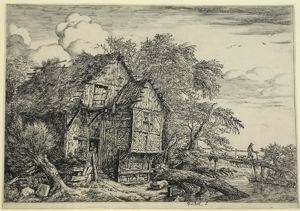 
âThe Little Bridgeâ (known by other titles including âThe Cottage and Footbridge,â âThe Rustic Cottage,â and âLe Petit Pontâ) was made as part of what scholars believe to be a series of four etchings the artist created in the early 1650s. During that period, he made a trip to the Dutch-German border region that prompted a specific group of identifiable subjects including half-timbered cottages and water mills. As with his landscape paintings, Ruisdael was not creating a simple record of a natural scene in âThe Little Bridgeâ. His contemporaries would have understood various elements of his paintings and prints as visual allegories, references to concepts such as the passage of time, and natureâs forces of regeneration. Time is made metaphorically manifest in the flowing stream, and in the decrepit state of the cottage that has succumbed to the ravages of time and nature. Van Ruisdael juxtaposes these elements of âmemento mori,â (or reminders of manâs mortality), with suggestions that there are regenerative forces at work as well as destructive ones. The new shoots of foliage that spring from the fallen tree in the foreground remind the viewer that in the cycle of existence, new life will spring from the old.
The series is identified because of the similarly of size, style, and technique. See http://www.knox.edu/library/special-collections-and-archives/exhibits/outside-the-shadow-of-rembrandt/ruisdael-cottage.html?ss=print accessed October 7, 2013.

Keywords Click a term to view the records with the same keyword
Water
Buildings
Tree
Portfolio List Click a portfolio name to view all the objects in that portfolio
This object is a member of the following portfolios:

Your current search criteria is: Portfolio is "Classification: Print" and [Object]Display Artist is "Jacob van Ruisdael".