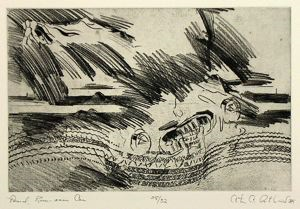 1986
From the Alabama Print Portfolio


Credit Line: Gift of the University of Montevallo


"Paved, Run-Over Car" is part of a series of works by painter and printmaker Carter Osterbind III that explore the landscape of roads in an expressive and almost abstract manner. However, Osterbind's interest is not in depicting true landscape; instead, he uses the idea of the pavement as "a formal flattening device."
In this etching, Osterbind depicts scattered auto parts in the center of the composition. The background features a mountainous landscape, while the artist creates broad, curving tire tracks that sweep horizontally across the foreground. Playing with perspective and working in a Neo-Expressionist manner, the artist creates a scene that is simultaneously realistic and dreamlike.

Keywords Click a term to view the records with the same keyword
Automobile
Portfolio List Click a portfolio name to view all the objects in that portfolio
This object is a member of the following portfolios:

Your current search criteria is: Portfolio is "Classification: Print" and [Object]Display Artist is "Carter Osterbind III".