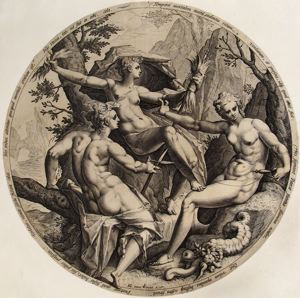 
"Die Drei Parzen" (The Three Fates) was designed and engraved by Goltzius in about 1587, and reproduces an earlier drawing, which is also in the round format, in reverse. This engraving falls within the period of Goltziusâ high Mannerist style, and prior to his visit to Italy in 1590. At this time, Goltzius and his workshop were producing series of works focusing on mythological subjectsThe Three Fates is a subject derived from Greek and Roman mythology. The iconography of the three goddesses as representations of determiners of human destiny, life span, and death dates from at least the Eighth Century, BC.

Keywords Click a term to view the records with the same keyword
Allegorical
Portfolio List Click a portfolio name to view all the objects in that portfolio
This object is a member of the following portfolios: