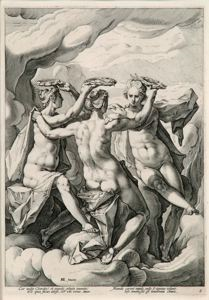 
The Greek goddesses known as The Three Graces (or The Three Charities) were daughters of Zeus and attendants of Aphrodite, goddess of love. The three were traditionally shown as they are in this engraving, arranged in a circle with their arms on each otherâs shoulders. Their actions (crowning one another with laurel wreathes) reflected their association with benevolence and reciprocityâgiving, receiving and returning. The artist, Jacob Matham, was the stepson of Hendrick Goltzius (Dutch, 1558â1617) and a member of his workshop. The design for âThe Three Gracesâ was modeled on a sepia drawing by Goltzius, who was the most accomplished and admired designer, engraver, and publisher of the late-sixteenth century in Northern Europe. The exaggerated musculature of the curvaceous Graces is characteristic of Goltziusâ mannerist style influenced by drawings of his contemporary Bartholomeus Spranger (Flemish, 1546-1611) and others who conveyed Italian Renaissance design concepts to Northern Europe.


Keywords Click a term to view the records with the same keyword
Figure Groups
Allegorical
Legendary
Mythological Figures
Nude Female
Dancing
Antiquities
Portfolio List Click a portfolio name to view all the objects in that portfolio
This object is a member of the following portfolios: