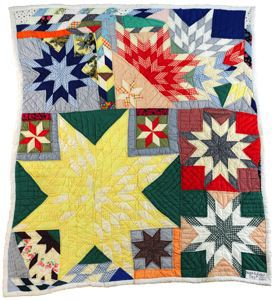 
he Montgomery Museum of Artsâ Star Puzzle (2001) quilt is the result of several decades of practice and variation of a standard blazing star design. The original pattern, as Ms. Ezell recounts, was made in 1974 while she and her husband still lived in New Jersey. After that original was completed, Nora Ezell went on to explore at least five other variations on the design, including the MMFAâs example. With each new Star Puzzle quilt, Nora Ezell took the opportunity to change some element of the composition; either the size of the star patterns, their color and pattern, their placement within the confines of the quilt, or the borders that surround them. Some of her variations may have been refined when she began working on her Broken Star (1981) quilt in 1981, which featured a central star design surrounded by repeating elements of the points, while others may have been on-the-spot improvisations.

Your current search criteria is: Portfolio is "Classification: Textile" and [Object]Display Artist is "Nora Ezell".