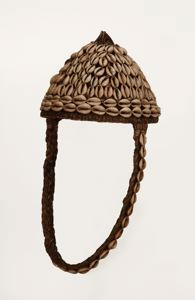 
Caps decorated with cowrie shells were owned only by Lega who held prestigious positions within Bwami, an elite association whose membership safeguarded the moral and social codes that regulated community behavior. Bwami permeated every aspect of life and taught principles of moral perfection through proverbs, dances, and the presentation of objects. Members of Kindi and Yonanio, the highest and second highest levels of Bwami, constituted the intellectual, moral, and political elite of Lega society.

Keywords Click a term to view the records with the same keyword
Shell
Hat
Portfolio List Click a portfolio name to view all the objects in that portfolio
This object is a member of the following portfolios:

Your current search criteria is: Portfolio is "Classification: Textile" and [Object]Display Artist is "Lega Peoples".