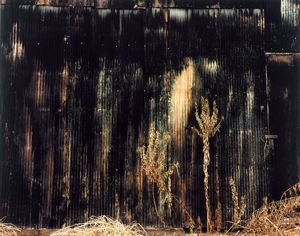 
William Christenberry was born 5 November 1936 in Tuscaloosa, Alabama. He attended the University of Alabama where he obtained BFA and MA degrees. He was appointed an Instructor of Art at his alma mater in 1959 and taught until 1961, when he accepted a position to teach at Memphis State University and became Assistant and then Associate Professor of Art. He moved to Washington, D.C. in 1968, where he served as Associate and then Professor of Art at the Corcoran School of Art from 1968 until 2006. He still resides in Washington, D.C., with his wife Sandy. Growing up in Hale County, Christenberry developed a fascination with the landscape of Alabama and its vernacular architecture. Though he has since firmly established himself in Washington, D.C., he maintains that Alabama is âwhere my heart is.â The sun, earth, and architecture of Alabama are what he appreciates. He said that he âempathize[s] with pure landscape.â On annual visits by car to his relatives, he responds to the Alabama landscape âyear after year.â He has no affinity for prefab architecture or antebellum Southern mansions, but instead has long gravitated towards Alabamaâs old country stores and aging or abandoned tenant buildings âthe âbeauty of a given structure.â He stated âthe things that have agedâthat appealed to me more.â In his paintings, drawings, sculptures, and photographs, he tries to capture images of those vernacular buildings of Alabama that are increasingly collapsing and disappearing. âAll of my workâwhether painting, sculpture, or photographyâdeals with my affection for the place I am from, Alabama.â

This is one of a series of photographs that the artist made of buildings that were painted black that he saw on a property in Hale County. He said that the photographs resulted from his âresponse to the landscape and the things in the landscapes that have [an] edge. Itâs not easyâthe black buildings at times can look very ominous and threatening. Not always, it depends on how I see it with the camera.â Christenberry asked the landowner why the buildings were painted black, Christenberry recounts: "And when you ask a question like that sometimes in the country people can slough it off and get testy, but he didnât. Iâll never forget. We were standing on the steps of this country store, looking across about three hundred yards of beautiful grass to the Black Buildings. And you could see his mind spinning. He said, âWell, Bill, Iâll tell you. Those old buildings were rusting pretty badly and we had a lot of black paint around.â Now, see, you think itâs pretty funny, I think its VERY funny, but some people find that a lead balloon storyâ¦It was a perfectly legitimate reasonâ¦I love that story."

Keywords Click a term to view the records with the same keyword
Abstraction
Industrial
Grass
Warehouse
Portfolio List Click a portfolio name to view all the objects in that portfolio
This object is a member of the following portfolios:

Your current search criteria is: Portfolio is "Classification: Photograph" and [Object]Display Artist is "William Christenberry" and [Object]Century is "Twentieth Century".