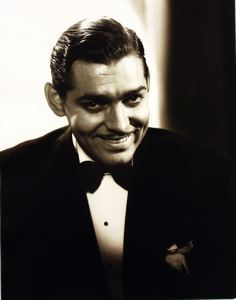 
Few of George Hurrellâs subjects are as instantly recognizable as Clark Gable (1901-1960), who starred as Rhett Butler in Margaret Mitchellâs "Gone With the Wind" in 1939. When Hurrell made this portrait for MGM in 1932, he captured the actorâs dashing good looks, as well as the broad smile and bright eyes that made him an American heartthrob. A studio shot typical of Hurrellâs glamourous style, it exhibits the sophisticated lighting, strong contrast, and simple composition that reads well in grainy news-media reproductions and the popular pictorial magazines of the day.

Keywords Click a term to view the records with the same keyword
Portraits
Figure
Male
Busts
Theatrical
Fashion
Formal dress
Cinema
Portfolio List Click a portfolio name to view all the objects in that portfolio
This object is a member of the following portfolios:

Your current search criteria is: Portfolio is "Classification: Photograph" and [Object]Display Artist is "George Hurrell".