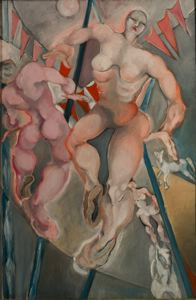 
Zelda Fitzgerald, wife of the novelist, F. Scott Fitzgerald, was the inspiration for many of his most famous female characters. Together, they were considered the most flamboyant couple of the "Jazz Age", but ultimately their lifestyle spelled the end of their marriage as well as their life together. A native of Montgomery, Zelda lived most of the latter part of her life with her Montgomery family, receiving periodic treatment for the mental illness which chronically plagued her. Zelda became interested in both art and ballet when she lived in Europe with Scott in the 1920s. She continued to paint throughout her life, her style based loosely on the design elements she adopted from artists practicing avant-garde stage design. "Circus" demonstrates her approach to composition and the human figure. Bodies with bulging muscles are intentionally distorted and elongated. The fractured planes on which the figures float and the skewed perspective are further reflections of French Modernist design.

Keywords Click a term to view the records with the same keyword
Abstraction
Female
Figure Groups
Horses
Theatrical
Nude Female
Dancing
Circus
Portfolio List Click a portfolio name to view all the objects in that portfolio
This object is a member of the following portfolios:

Your current search criteria is: Portfolio is "Classification: Painting" and [Object]Display Artist is "Zelda Sayre Fitzgerald" and [Object]Century is "Twentieth Century".