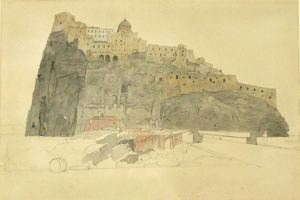 
Haseltine was an American expatriate artist who lived and worked in Italy for most of his career. A native of Philadelphia and a graduate of Harvard, he travelled to Europe in 1854 to study art. Although he returned to the United States to begin his career as a painter, he settled in Rome in 1867 and only rarely visited the United States again.

Haseltine painted many Italian landscapes in his career, and was widely known for his scenes of Venice. However, he also painted scenes of the coastline around Naples, and this watercolor depicts a site near the island of Ischia. The structure is the Aragonese Castle, first built in 474 BC as a fortress on a rock near the island. In the fifteenth century the fortress was connected to the island by a stone bridge, and it is today maintained as an historical site.

Keywords Click a term to view the records with the same keyword
Townscape
Buildings
Rocky Landscape
Portfolio List Click a portfolio name to view all the objects in that portfolio
This object is a member of the following portfolios:

Your current search criteria is: Portfolio is "Classification: Painting" and [Object]Display Artist is "William Stanley Haseltine".