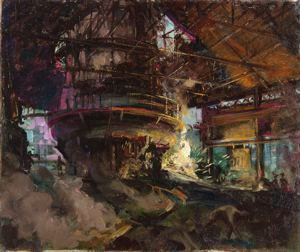 
Richard Coe painted "Birmingham Steel Mill" the same year he expounded his philosophy that American painting should reflect American populist values. It illustrates his dictum in that it beautifies the technology that was at the core of the Alabama's largest cityâs economic and political power. The mechanism of the furnace, surrounded by steam and sparks, is the sole focus of the composition, the human workers subservient in scale and barely visible within the gloom. While Coe dramatized and romanticized industrial development, which had become a key component of the New Southâs economy, by minimizing the human presence he suggested that it was a mixed blessing at best. The economic promise was encouraging, but the dark, cavernous factory setting speaks of the dehumanizing environment that would displace the family farms at the heart of the agrarian economy, fueled by the Southern sunshine.

Keywords Click a term to view the records with the same keyword
Figure
Industrial
Portfolio List Click a portfolio name to view all the objects in that portfolio
This object is a member of the following portfolios:

Your current search criteria is: Portfolio is "Classification: Painting" and [Object]Display Artist is "Richard B. Coe".