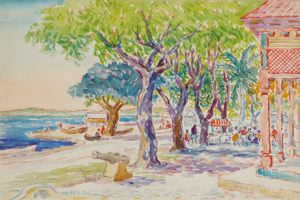 
Beal spent much of his childhood in and on the water, and was fascinated with ships of all kinds, particularly sailboats. He began sketching as early as the age of six and his father encouraged him to keep notebooks of his sketches and observations. Beal studied at the Art Student's League and at William Merritt Chase's summer school at Shinnacock, Long Island. He worked in many media, but was primarily known as a painter of seascapes and boating scenes. When he married in 1924, he and his wife began to travel extensively, and he consistently painted watercolors in the places they visited.

Keywords Click a term to view the records with the same keyword
Seascapes
Water
Harbor
Townscape
Boat
Tree
Summer
Cannon
Portfolio List Click a portfolio name to view all the objects in that portfolio
This object is a member of the following portfolios:

Your current search criteria is: Portfolio is "Classification: Painting" and [Object]Display Artist is "Reynolds Beal".