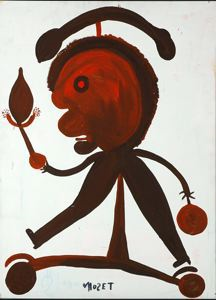 Man on a Scooter

Medium and Support: Oil and acrylic on fiberboard
Accession Number: 1982.0009


"Man on a Scooter" is one of Mose Tolliver's more complicated images. The composition of the work is typical of Tolliver's paintings with its centrally placed figure and plain background. However, the motif of a man, rather than a woman, on a scooter is unusual for Tolliver because of the scooter's sexual connotations in his other works. The object balanced on the man's head has a phallic quality and mirrors the shape of the scooter below, but in combination with the other objects the figure is holding, suggests a departure from Tolliver's previous "jick-jack" imagery.The flower-like and circular objects in the figure's hands also give it an emblematic quality suggesting that it represents a figure from Tolliver's personal mythology rather than one of his humorous or everyday "types".

Keywords Click a term to view the records with the same keyword
Male
Portfolio List Click a portfolio name to view all the objects in that portfolio
This object is a member of the following portfolios:

Your current search criteria is: Portfolio is "Classification: Painting" and [Object]Display Artist is "Mose Tolliver".