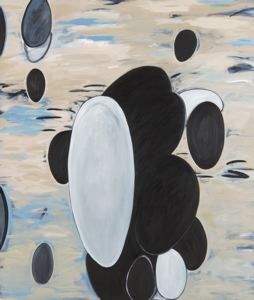 
"V4" is the fourth in a series of paintings John Moore began in 1990 which were oriented vertically; the "V" in the title stands for "vertical". "V4" is one of a group of works from the early 1990s where large black masses occupy the foreground of Moore's paintings, blocking access to large segments of the space behind them. In "V4", however, this mass has already begun to break into the individual oval shapes characteristic of Moore's latest works, and the central mass has been reduced to serve more as a point of focus than a barricade. The palette in "V4" also is lighter than much of Moore's previous work, but the brushy background and tension between foreground and background characteristic of his works also are present. The suggestion is of a universe created by the artist within his canvas, a tangible environment that is constantly in motion, mirroring the shifting of people and relationships as they move through life's experiences. He associates this work, and others from this time period, with the Middle Passage, that is the practice of forcible removal of Africans from their own continent into slavery in the Carribbean and the Americas. He spectulates regarding his own lineage, and his anonymous ancester who traveled this path centuries before he was born.

Your current search criteria is: Portfolio is "Classification: Painting" and [Object]Display Artist is "John L. Moore".