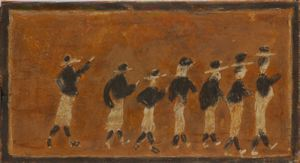 
Jimmy Lee Sudduth was one of a group of artists whose creativity expanded the boundaries of what was once considered mainstream art in the twentieth century. These artists, now usually categorized as self-taught, have attracted an enthusiastic audience of collectors and admirers who appreciate the strength and heartfelt sincerity of their productions. Both the artists and collectors are passionate advocates of basic human values and emotions, expressed in an astounding array of media and subject matter. Work like Sudduthâs was once considered merely odd or eccentric; now it is cherished for its originality, its joyous spirit, and its evocation of ways of life in the rural South.

"Figures Walking" is an unusual and complex subject that conveys the ambiguity in some of Sudduthâs paintings. The qualities of the clayâits colors and rough, grainy textureâadd a sense of warmth and tangible atmosphere. It is hard to decipher the characteristics of the figuresâthey could be young or old, male or female. The space is similarly illegible; the figures appear to stroll through a void. Their uniform clothing and pointing gestures look meaningful, but resist specific interpretation. This very ambiguity adds to the appeal of the painting, implying a sense of mystery and magic.


Keywords Click a term to view the records with the same keyword
Figure Groups
Hat
Portfolio List Click a portfolio name to view all the objects in that portfolio
This object is a member of the following portfolios: