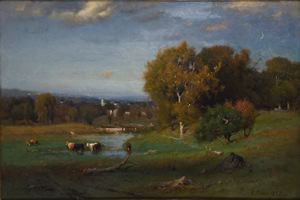 
George Innessâs paintings of the 1870s are considered some of his most accomplished works. His emphasis during this decade of his long career was to balance virtuoso brushwork with rich, expressive color. By this point, Inness was creating primarily idealized studio compositions based upon field studies and preparatory sources, so this image of a landscape, while titled "Medfield", was most likely a composite of various elements of scenery rather than a record of a specific place.

Innessâs relationship with Medfield, Massachusetts, just outside of Boston, began in 1860 as he sought a refuge from the pressures of the art world in New York City. The proximity to Boston gave him access to an active art environment in which Barbizon painting, a French landscape painting style that informed some of Innessâs earlier works, was better accepted and more widely collected than in New York.

Keywords Click a term to view the records with the same keyword
Landscapes
Cattle
Fields
Tree
Portfolio List Click a portfolio name to view all the objects in that portfolio
This object is a member of the following portfolios:

Your current search criteria is: Portfolio is "Classification: Painting" and [Object]Display Artist is "George Inness".