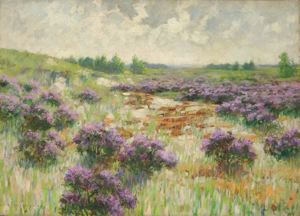 
Credit Line: Montgomery Museum of Fine Arts Association Purchase through the Acquisitions Fund and a generous gift from the Volunteer Services Organization


"Field of Heather " typifies Hitchcock's documented work of the later 1890s and into the earlier twentieth century. Beginning in the 1880s, Hitchcock painted similar scenes of fields, but he had usually incorporated figures, largely Dutch women in peasant dress, as part of these compositions. Many of these images were quasi-religious in tone. In addition, HItchcock's paintings usually documented cultivated fields of flowers, structured in parallel rows of blooms, such as the tulips that were symbolic of Holland and associated with international flower trade. While this work depicts flowers in a field, it is a country view of wild flowers across a meadow. Its style is consistent with Hitchcock's variation on nineteenth-century Impressionism, with an emphasis on dashes of color blended on the canvas creating a sensation of the broken light playing across the landscape on a partly cloudy day.

Keywords Click a term to view the records with the same keyword
Landscapes
Fields
Flower
Cloudy Sky
Grass
Portfolio List Click a portfolio name to view all the objects in that portfolio
This object is a member of the following portfolios:

Your current search criteria is: Portfolio is "Classification: Painting" and [Object]Display Artist is "George Hitchcock".