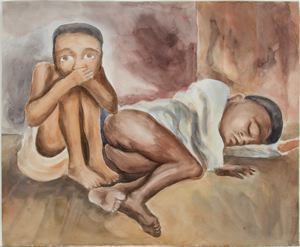 
The watercolor Untitled (Watcher and Sleeper), about 1935-1938, is in both subject and style consistent with Alabama painter Crawford Gillisâs work of the mid- 1930s. During that time period, Gillis was painting subjects which illustrated the plight of the poor and disadvantaged in the South, and most particularly in Selma, during the Great Depression.

The unassuming simplicity of the figures emphasizes their universality, and places importance on their features and gestures. The seated child covers his mouth with his folded hands, suggesting a prohibition against speaking, and perhaps symbolizing a lack of "voice." His wide-eyed gaze calls attention to the sense of sight. This sense of sight, or awareness, is contrasted with the lack of awareness (or consciousness) of the sleeping child. The composition conveys the powerlessness of children, and particularly the disadvantaged. The artist saw many such children during the Depression, black and white, who lacked the opportunity for education and suffered from the effects of the dire poverty of their families. This composition suggests his understanding of the universal helplessness of the poor.

Keywords Click a term to view the records with the same keyword
Child
Sleep
Portfolio List Click a portfolio name to view all the objects in that portfolio
This object is a member of the following portfolios:

Your current search criteria is: Portfolio is "Classification: Painting" and [Object]Display Artist is "Crawford Gillis".