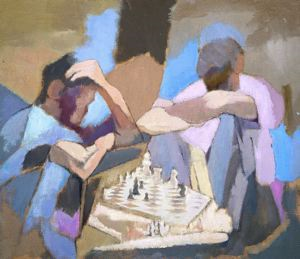 
Gillis painted Chess Players, the work in the MMFA collection, during the period when he was most heavily influenced by Cubist art, particularly the painter Jacques Villon. Though his work never entirely departs from a realist style, many of his paintings from the 1940s and 1950s are noticeably Cubist in appearance. In a letter, Gillis described the history and subject of the painting: "The painting was done on canvas of my own manufacture, using the best available imported Belgian linen, rabbitskin glue, and white lead, in the tradition of the time-tested, old master formulae. The subjects were two chess-playing friends of mine, and [it] is a composite-synthesis of many sketches made over a period of months."

Keywords Click a term to view the records with the same keyword
Figure Groups
Leisure Activity
Portfolio List Click a portfolio name to view all the objects in that portfolio
This object is a member of the following portfolios:

Your current search criteria is: Portfolio is "Classification: Painting" and [Object]Display Artist is "Crawford Gillis".