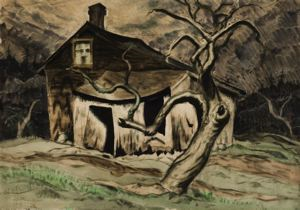 Medium and Support: Watercolor and graphite on paper
Accession Number: 2009.0017


An inscription on the back of this work indicates that it was painted near Washingtonville, Ohio, and thus is an early work made before Burchfield moved to Buffalo, New York in 1921. Titled "Black-Eyed Shed", it shows an apparently abandoned storage building, its coloration and surroundings suggesting that it may have been charred by fire. The title was most likely suggested by a window near the eave of the building that appears to have a ghostly, stylized face peering from within.

Throughout his career, Burchfield reveled in the simplest, most direct expressions of his reactions to the world around him. His forms and his brushwork were the vocabulary he utilized to express his wonder at all creation in itsâ states of genesis as well as decay. This is particularly true in paintings such as "Black-Eyed Shed"; as with most of his early paintings there is an overwhelming sense of impending change and evolution, whether for good or ill is often unclear.

Keywords Click a term to view the records with the same keyword
Buildings
Tree
Portfolio List Click a portfolio name to view all the objects in that portfolio
This object is a member of the following portfolios: