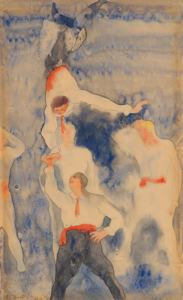 
Demuth achieved a high public profile for his oil paintings and drawings executed in the style known as Precisionism, that is angular and abstracted compositions that link his work to that of the other American Modernists of the early twentieth century. However, Demuth essentially worked in two quite different styles concurrently, and "Acrobats, Balancing Act", is exemplary of his second style; watercolors executed with sinuous, fluid lines and transparent washes of color.

The subject matter of this work reflects Demuth's interest in performers, most likely due to the influence of Henri Toulouse Lautrec, Edgar Degas and other French artists who depicted similar cabaret and theater subjects. While he was a well-traveled and urbane man, most of his theatrical subjects were derived from acts he saw at the local theaters in his home of Lancaster, Pennsylvania, the Fulton Opera House and the Colonial Theater.

Keywords Click a term to view the records with the same keyword
Figure Groups-Men
Theatrical
Circus
Hands
Theatrical Costume
Portfolio List Click a portfolio name to view all the objects in that portfolio
This object is a member of the following portfolios:

Your current search criteria is: Portfolio is "Classification: Painting" and [Object]Display Artist is "Charles Demuth".