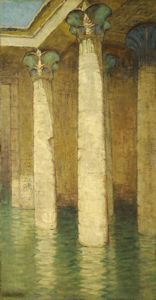 
"Columns at Philae, Egypt", depicts a temple colonnade on Philae, an island in the Nile River in southern Egypt. The temple was most likely devoted to the goddess Isis, since in ancient times Philae was dedicated to her worship. Brewster concentrated her attention on the structureâs monumentality, while also capturing the antique images and inscriptions that embellish the stone columns. When Brewster and her husband visited in 1912, Philae was known to be in jeopardy. It had been flooded in 1902 by a reservoir created when the Aswan Dam was built across the Nile, and a technical examination in 1907 revealed the deterioration of the architectural decoration. The place Brewster painted no longer exists as she saw it. Eventually the temples were removed to higher ground nearby and reopened in 1980.

Keywords Click a term to view the records with the same keyword
Water
Columns
Portfolio List Click a portfolio name to view all the objects in that portfolio
This object is a member of the following portfolios:

Your current search criteria is: Portfolio is "Classification: Painting" and [Object]Display Artist is "Anna Richards Brewster".