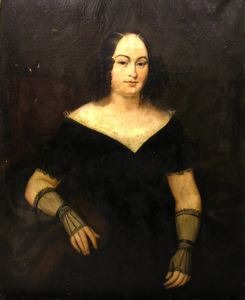 
The title âCreole Belleâ was supplied by Isaac Monroe Cline, the dealer who sold the work to the museum in 1938, and the work seems to be painted with reasonable anatomical accuracy and even a spark of life in her large brown eyes. However, there is nothing about the composition, pose, or handling that distinguishes the artistry of this portrait from that of scores of others from this era. The subject sits rather squarely in an upholstered chair before a flat, dark background. Her pallid face and arms are illuminated with a general light from beyond the canvas. Still, the heavy-set young woman catches our eye with her direct gaze. And her peculiar fingerless gloves (or more correctly, mittens) capture our attention. In the dozens of paintings illustrated in the many books on Southern art (those cited above as well as others), only one other subject wears anything similar.

Currently, no record has been found of other works by Leonard Poyet. He may have been but another of many itinerant artists like the better known Joseph Henry Bush and Theodore Moise who worked in New Orleans and along the Mississippi River around 1840. Like Adolph Rinck, who arrived in New Orleans in 1840 and remained active there until 1873, he would have followed the French-trained Jean-Joseph Vaudechamp, whose relatively well-documented and prosperous seasonal career among the Creole aristocracy of New Orleans lasted from 1832 to 1839.

Keywords Click a term to view the records with the same keyword
Portraits
Female
Gloves
Fashion
Portfolio List Click a portfolio name to view all the objects in that portfolio
This object is a member of the following portfolios: