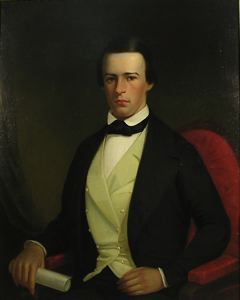 Portrait of J. A. Rozier


Amansâ "Portrait of J. A. Rozier" is typical of the portraits he painted of the socially prominent in New Orleans between 1836 and 1856. As a client of Amansâ, Rozier would fall into the category of the âwell-to-doâ. Born in Ste. Genevieve, Missouri, Rozier was the son of pioneers of French descent. After completing law studies in Paris, France, he moved to New Orleans in 1839 and was admitted to the bar in 1840.

Rozier established a flourishing law practice in New Orleans and distinguished himself politically. He was a Whig before the Civil War, a conservative Unionist during Reconstruction, and a Democrat in the late nineteenth century. He served as one of the New Orleans representatives to the 1861 Louisiana secession convention in Baton Rouge and was one of seventeen representatives to vote against the secession ordinance. In later years Rozier served as president of the New Orleans Bar Association.

Keywords Click a term to view the records with the same keyword
Portraits
Male
Fashion
Portfolio List Click a portfolio name to view all the objects in that portfolio
This object is a member of the following portfolios: