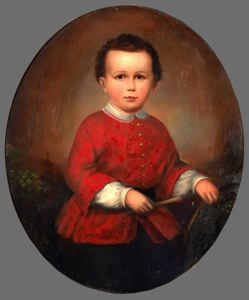 
Francis Alexander was born in Killingly, Connecticut on February 3, 1800. After studying briefly with Alexander Robertson in New York City, he began his career as a still-life, genre, and portrait painter in Killingly and Providence, Rhode Island. In 1827 he moved to Boston where he soon became one of that cityâs leading portraitists, achieving honorary member status in the National Academy of Design in 1840. The artist and his family moved to Italy in 1853, and lived in Florence for the rest of his life.

The work is neither signed nor dated. The attribution of this painting to Francis Alexander and the identity of the subject are based on the museumâs accession records from 1936. If these are correct, the portrait was probably painted in Boston between 1827 and 1853.

Keywords Click a term to view the records with the same keyword
Portraits
Male
Child
Oval
Toys
Fashion
Portfolio List Click a portfolio name to view all the objects in that portfolio
This object is a member of the following portfolios: