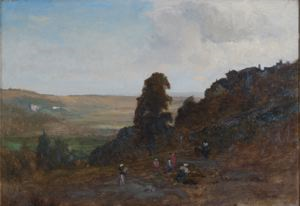 
In 1870, George Inness departed for his third trip to Europe, planning to remain there indefinitely. This journey was essentially a business arrangement in which he contracted with his Boston dealers, Williams & Everett, to provide paintings in exchange for a stipend. It was Innessâs responsibility to create works that would appeal to the popular market, and thus he chose to visit and depict tourist destinations around Romeâparticularly Tivoli, Perugia and the Alban Hills.

The traditional title of this painting (A Glimpse of the Lake, Albano, Italy) associates it with Lake Albano, a small crater lake in the Alban Hills, about fifteen miles southeast of Rome. The Popeâs summer residence, Castel Gandolfo, is nearby and the hills were considered a refuge from the summer heat. In actuality, the painting represents a neighboring area, Vallericcia, with the town of Ariccia at the top of the hill on the viewerâs right. Inness scholar Michael Quick notes that âhe [Inness] tried numerous novel viewpoints, often centered on neighboring Ariccia and probably not familiar to most tourists. Ariccia and its nearby park had been frequent subjects for European artists since the time of Claude but were painted by few American artists.â

Keywords Click a term to view the records with the same keyword
Landscapes
Tree
Portfolio List Click a portfolio name to view all the objects in that portfolio
This object is a member of the following portfolios:

Your current search criteria is: Portfolio is "Classification: Painting" and [Object]Century is "Nineteenth Century" and [Object]Display Artist is "George Inness".