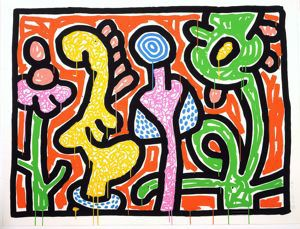 1990
From the portfolio, Flowers


In 1981, Keith Haring began making simple chalk drawings in the subways of New York City inspired by the city's nightlife, street music, and break dancing. His cartoon-like figures formed with energetic lines and, later, bright colors became representative of the New York art scene in the 1980s. Haring's motifs, including pyramids, hearts, barking dogs, and radiant children often conveyed messages that commented on contemporary society and the use of graffiti allowed the artist to broadcast his ideas to the widest audience. Untitled (Flowers) is one of a series of five images that Haring made in 1989 that incorporate anthropomorphized floral motifs interacting in a way that suggests human discourse. Outlined in black, the forms suggest fertility and the power of nature. The artist uses color that is bright and attractive to the viewer in the way a flower attracts an insect. The works carry forward Haring's fascination with humans in social terms, relating them to the broader world of nature.

Keywords Click a term to view the records with the same keyword
Abstraction
Flower
Portfolio List Click a portfolio name to view all the objects in that portfolio
This object is a member of the following portfolios:

Your current search criteria is: Related to "Keith Haring".