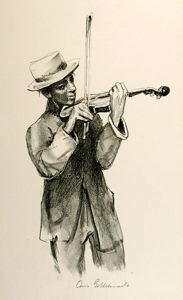 
This print captures a moment from everyday life more common in the early 20th century than today. While the street musician is still found in high traffic urban areasâ particularly in cities like New York, Paris, or New Orleansâ very few make a living anymore by playing street music.

The subject is focused and âin the moment,â distinguishing this scene from art of an earlier era when the subjects would have appeared more formally posed. Images of everyday Americans came to play a role in cementing the bonds between them over time as they recognized themselves and their interests in these casual depictions.

Keywords Click a term to view the records with the same keyword
Male
Musician
Music
Musical Instruments
Portfolio List Click a portfolio name to view all the objects in that portfolio
This object is a member of the following portfolios:

Your current search criteria is: Keyword is "HN".