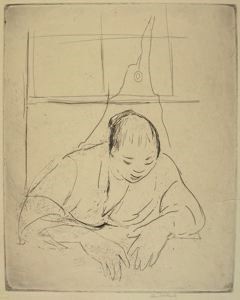 
Anne Goldthwaite was born in Montgomery, Alabama in 1869. She moved to New York City in 1898, where the generosity of an uncle allowed her to begin classes at the National Academy of Design. After completing the program in 1905, she resolved to study in Paris, France. She spent seven years living and learning in the European capital, and in 1913 she returned to New York City. That same year she exhibited a painting in the Armory Show, displaying her work along side Marcel Duchamp, Paul Cezanne and Edgar Degas and other Europeans. She remained in New York, taking a teaching job with the Art Students League in 1922, where she taught until her death in 1944. Here Goldthwaite depicts herself leaning out of the window on East Tenth Street in the Greenwich Village neighborhood. Although known as a painter, Anne Goldthwaite embraced the process of printmaking, especially etching and the related process of drypoint. Print etching began in the fifteenth century as a derivative of the process of armor etching. Artists used the inscribed, acid-etched metal plates, and began applying ink to them. These plates were then passed through a press, resulting in an ink image with the line and light to dark value qualities of a drawing that could be reproduced many times. Drypoint relies more heavily on drawing techniques, as the plate is inscribed and inked but not etched in an acid bath. All of the prints included in this exhibition are etched or drypoint prints.
SM 4/20/09

Keywords Click a term to view the records with the same keyword
Female
Window
Portfolio List Click a portfolio name to view all the objects in that portfolio
This object is a member of the following portfolios:

Your current search criteria is: Object is "East Tenth Street (Anne at the Window)".