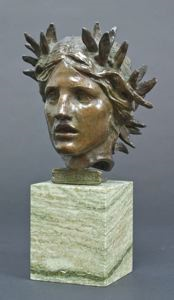 Medium and Support: Bronze on marble base
Accession Number: 2018.0008


Augustus Saint-Gaudens was one of the greatest American sculptors of the late nineteenth century, and was associated with the stylistic movement known as the American Renaissance. Architects, decorative artists, painters, and sculptors such as Saint-Gaudens all contributed to create public buildings, monuments, and large private homes that reflected the renewed self-confidence of Americans who had survived the destruction and national despair produced by the Civil War. Their work revitalized and conveyed the national pride of a newly prosperous democracy whose citizens embraced the influence of the republics of ancient Greece and Rome, as well as the humanistic theories of the Italian Renaissance.

Saint-Gaudens produced numerous monumental sculptures as memorials during his career, and among the greatest was his last, the Sherman Monument (1892-1903) located in the Grand Army Plaza in New Yorkâs Central Park. This bronze head of Victory was a reduction of one of the models Saint-Gaudens made for the head of Victory who leads General Sherman, mounted on horseback. Saint-Gaudensâ use of the personification of the mythological figure associated with Greek and Roman warriors ties this work, and by extension Sherman himself, to the grandeur of classical sculpture, as well as the renewed interest in ancient civilizations, both of which characterized late nineteenth- century American art.

Additional Images Click an image to view a larger version

Proper Right
Portfolio List Click a portfolio name to view all the objects in that portfolio
This object is a member of the following portfolios:

Your current search criteria is: Object is "Head of Victory".