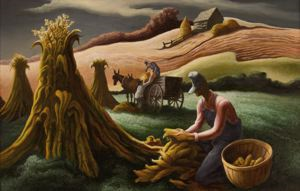 
Thomas Hart Benton made a practice of traveling around the U.S., particularly through the Southern and Midwestern regions in the late 1920s and 1930s, producing drawings of the places and people he saw. Through his art, he sought to capture what he felt was the character of the land and its people. He saw a society grounded in an appreciation for freedom, democracy, personal accountability, pragmatism, and hard work. "Ozark Autumn" was painted literally in the "autumn" of the artist's careerâan elegaic, landscape-based tribute to a great country founded in these principals. In later paintings such as "Ozark Autumn" he references traditional Old Master European painting styles, using great, sweeping brushstrokes to model his forms and unify his composition, conveying a sense of rolling hills, cloud-studded skies, while integrating the almost sculptural forms of the landscape itself and the figures. He began imparting to his work a greater sense of grandeur and a less frenetic pace, as the artist relished his own memories of a simpler time in American life and paid it homage, grounding his art and this work in the countryâs agrarian past.

Keywords Click a term to view the records with the same keyword
Basket
Wagon
Farming
Mule
Vegetables
Fall
Portfolio List Click a portfolio name to view all the objects in that portfolio
This object is a member of the following portfolios:

Your current search criteria is: Keyword is "LY".