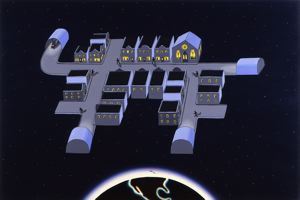 
Although often grouped with the Chicago Imagists, Brown's oeuvre sits uneasily within this categorization. In fact, his work stretched beyond their stylistic constraints to occupy a place that is uniquely his. Brown created narrative images based on recognizable vernacular imagery. His individual style encompasses certain hallmarks: use of pattern, strong angles and a shifting perspective often rendered in a palette primarily consisting of grey, pine green, black, yellow, white, and light blue all bordered by black outlines. Though referencing reality, his works are very stylized. In a sense, Brown is a history painter, recording a distinctly American landscape. Creating an urban neighborhood in outer space, Brown evokes the power of community to create safety and comfort in "Homesick-Proof Station". Although isolated in this serene image, key comforts of home are still available: secure and familiar living spaces, a sense of community, and the solace of one's faith. Floating in outer space, this urban space station is tethered to earth by Brownâs portrayal of our planet underneath. The gradual shifting of colors blending earth into space situates our planet in the larger cosmos, and perhaps indicates man's ties to the universe through both space exploration and their dreams. Brown reminds us of actual future possibilities in space. Certainly, while temporary space station living is a reality, it is only trained astronauts in a highly technological and controlled environment that participate in this endeavor. Today in 2013, Brown's version of the "Homesick-Proof Space Station" is still a science fiction fantasy, albeit a more simplified version than the science fiction portrayed in movies or television. This simplicity is typical of Brown's stylizing his images. Yet, by stripping away all but the necessary components Brown is able to subtly convey his ideas in a powerful way. For example, the space station, as Brown depicts it, appears self-contained with a controlled atmosphere (as evidenced in the lack of helmets worn in the buildings). However, it is not truly self-sustaining as there are no apparent food sources, or other conveniences or necessities that truly make a neighborhood work. Instead, Brown presents a symbolic scene of âhomeâ, an idealized hope for the future, one where humans can cohabitate peacefully and simply out in the greater universe.

Keywords Click a term to view the records with the same keyword
Figure Groups
Buildings
Star
Planet
Portfolio List Click a portfolio name to view all the objects in that portfolio
This object is a member of the following portfolios:

Your current search criteria is: Object is "Homesick-Proof Space Station".