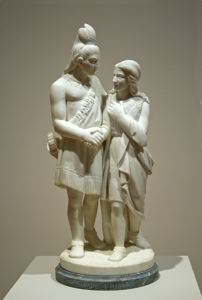 
During her first years in Rome, Edmonia Lewis produced several sculptures related to her Native American heritage that were inspired by Henry Wadsworth Longfellowâs popular epic poem, "The Song of Hiawatha," published in 1855. These included this figural group showing the warrior Hiawatha and his bride, Minnehaha. This version, dated 1868, is one of at least five that the artist produced between that year and the mid-1870s. Deciphering the content of Lewisâs sculptures inspired by Longfellowâs "The Song of Hiawatha" is complicated by her gender and her Native American heritage. Did she choose the subject popularized by Longfellow to capitalize commercially on the poem, to associate herself with the poemâs protagonist or his bride, to champion her motherâs race, to strengthen her Native American identity (and thus perhaps to marginalize her African- American heritage), or some combination of those and/or other factors? She left no verbal or written commentary on those topics.

Keywords Click a term to view the records with the same keyword
Figure Groups
Ceremony
Cloak
Literary Characters
Quiver of arrows
Period Dress
Portfolio List Click a portfolio name to view all the objects in that portfolio
This object is a member of the following portfolios:

Your current search criteria is: Object is "Hiawatha's Marriage".