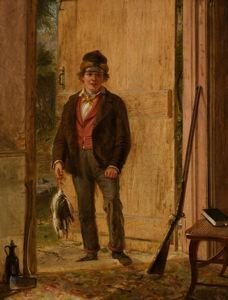 
A native of Long Island, NY, Mount was one of the earliest students at the National Academy of Design, taking classes there in 1826. He studied engravings after the works of the nineteenth-century Scottish artist David Wilkie (1785-1841), as well as Dutch and Flemish genre painters of the seventeenth century. Mount was one of the first and most influential of the mid-nineteenth century American genre painters; his works were engraved and published and his reputation was solidified by this wider exposure. The subject of this painting, a young man peddling a catch of fish to a rural household, was a common one in nineteenth-century American painting. Peddlers were rural subjects that resonated with urban dwellers in an era when both commerce and the dignity of honest labor were idealized as the essence of American character. The young manâs neat dress and the classical composition, his figure framed by the door open to the world beyond, convey the boyâs importance as a symbol of an orderly and prosperous society.

Keywords Click a term to view the records with the same keyword
Animals
Figure
Male
Water
Child
Fish
Book
Duck
Fashion
Axe
Shotgun
Portfolio List Click a portfolio name to view all the objects in that portfolio
This object is a member of the following portfolios:

Your current search criteria is: Object is "Any Fish Today?".