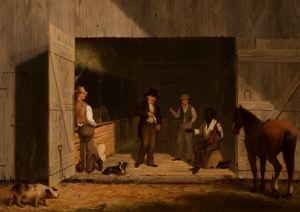 Holidays in the Country, The Cider Party


George Henry Durrie (1820-1863) is best known as a painter of New England winter landscapes in the mid-nineteenth century. Based in New Haven, Connecticut between the 1830s and the late 1850s, ten of the artist's landscapes were mass-produced as chromolithographs by Currier and Ives in the 1860s. The prints enhanced Durrie's reputation in the twentieth-century. Durrie painted a small number of mid-nineteenth century genre scenes shortly before the Civil War. In composition and content they were highly influenced by the works of William Sidney Mount (1807-1868), whose paintings were probably known to him either directly through exhibition or through lithographic reproduction. The subjects, such as that in "Holidays in the Country, The Cider Party", show casual interaction among members of the races, projecting an easy camaraderie that belied the social tension of the period. Paintings such as this one were filled with allegory and symbolism, such as the drawing and writings on the barn door, and the interaction of the farm animals in the foreground. All these elements, taken together, would have signaled contemporary viewers that this painting conveyed opposition to the Compromise of 1850, a series of legislative acts that was designed to broker peace between the political interests of North and South, but eventually failed, leading to war.

Keywords Click a term to view the records with the same keyword
Dogs
Historical
Political
Genre
Horses
Figure Groups-Men
Musician
Pig
Barn
Violin
Doorway
Leisure Activity
Party
Portfolio List Click a portfolio name to view all the objects in that portfolio
This object is a member of the following portfolios: