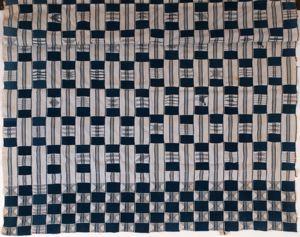 
By the 18th century, both Akan-speaking peoples and Ewe-speaking peoples had developed an elaborate type of weaving called "kente" in which narrow strips of cloth were sewn edge to edge to create a large cloth. Kente was worn toga-style by men and wrapped around the waist by women.
This kente includes representational elements such as birds. Figurative patterns are typical of the Ewe, but the border design resembles that produced by the neighboring Asante. This combination of features suggests that the maker was a northern Ewe who lived in an area inhabited by Ewe and Asante.

Your current search criteria is: Object is "Man's Wrapper (Kente)".